I was once a small frightened person. The older brother who lived with us acted in strange and bewildering ways, sometimes loud and sometimes hurtful. His activity drew the focused attention of my parents often rendering me invisible. The things I made brought me attention, especially sought from my father*, who himself was an artist, self taught, well read and knowledgeable. So I got to go to art making classes and workshops, to visit art museums, often trailing after my father and brother on their Sunday outings. There were even opportunities to visit artist studios, like that of Ad Reinhardt whose insistence that his black paintings had no meaning other than black; a difficult concept for a young mind. It was at the High School of Music and Art, where being different was a good thing, and the arts were paramount and social issues important, where I began to find myself. Here I discovered a love for form, working with clay in ceramics and sculpture classes I began a lifelong pursuit.

Going off to college at SUNY Binghamton got me far enough away from home and a chance to explore an interest in the theater, particularly the visual and technical side.
I returned to New York City after graduation where I found limited job opportunities, eventually being hired as a recreation director in a program for children with special needs. The kids I met were actually quite amazing and will never be forgotten. After a day working downtown I could attend classes with the sculptor Chaim Gross and life drawing at the Art Students’ League. The desire to understand the figure, to know it’s forms and shapes drove me to more and more study. Study which continued for many years.

Leaving New York for Long Beach, California with the goal of a formal teaching credential and an elementary teaching position, was difficult. I eventually found a position with the Los Angeles School District.
The work I did with kids was a good education for having children of my own. During the child raising period my free time was spent in classes and workshops in figure drawing and sculpture. Eventually I found my way to the Design, Art and Architecture program at Santa Monica College where I came in contact with some local professional artists as Laddie Dill, George Herms and Lisa Adams. This experience helped broaden my perspective and desire for further professional training and so attended the MFA program at Claremont Graduate University.
The time since has been devoted to making work for exhibition and sale. I’ve shown at the Armory Center for the Arts in Pasadena, 18th Street Art Center in Santa Monica, the Brand in Glendale, Gallery 825 of the Los Angeles Art Association, Bg Gallery and Hale Arts in Santa Monica.
In 2005 I traveled in China and attended a residency at the Chinese European Art Center at Xiamen University. Returning and remaining in China thereafter I was commissioned to create the signature sculptural piece for a development in Guangzhou and also have participated in a number of exhibitions in Southern China. During my time in China I have gotten to know many Chinese artists, and learned about diverse techniques and attitudes for making art. Most recently I have been awarded a contract for an exhibition at Los Angeles International Airport.
My focus has long been the female figure. I love the soft rounded forms and also see that such pieces can add to the conversation about gender and feminism. 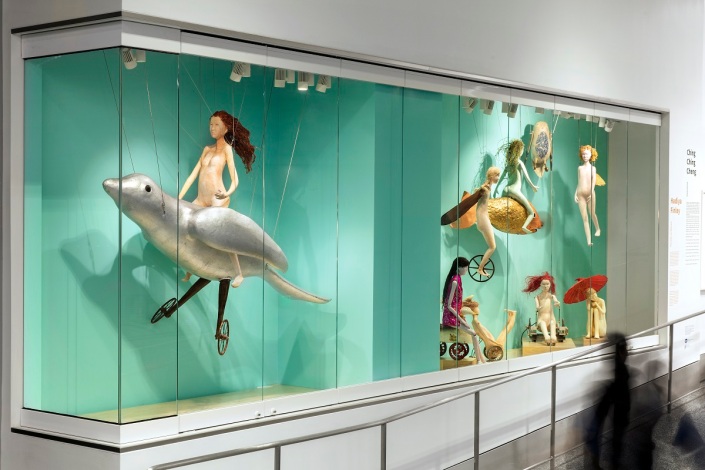